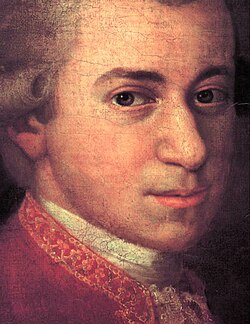 Mozart was one of the most influental composers of the time. He composed over 600 works including: 21 stage and opera works, 15 Masses, over 50 symphonies, 25 piano concertos, 12 violin concertos, 27 concert arias, 17 piano sonatas, 26 string quartets, and many other pieces. While Mozart was in Rome as a child, the pope awarded him the Order of the Golden Spur, a very high honor. His most prodidious stage was during his childhood. Mozart could write music before he could write words. He was often called "wolfie" by his friends, thanks to his first name. Another skill of Mozarts, was that he could listen to a piece of music once, Then write it down in music without any mistakes. Unfortunatley, Mozart died at an early age of 36 (1791), where he was at his most powerful musical stage. The cause of death was recorded as “severe miliary fever”. His wife Constanze was so upset that she crawled into bed with her dead husband so she could catch his illness and die with him, both wierd and sad.